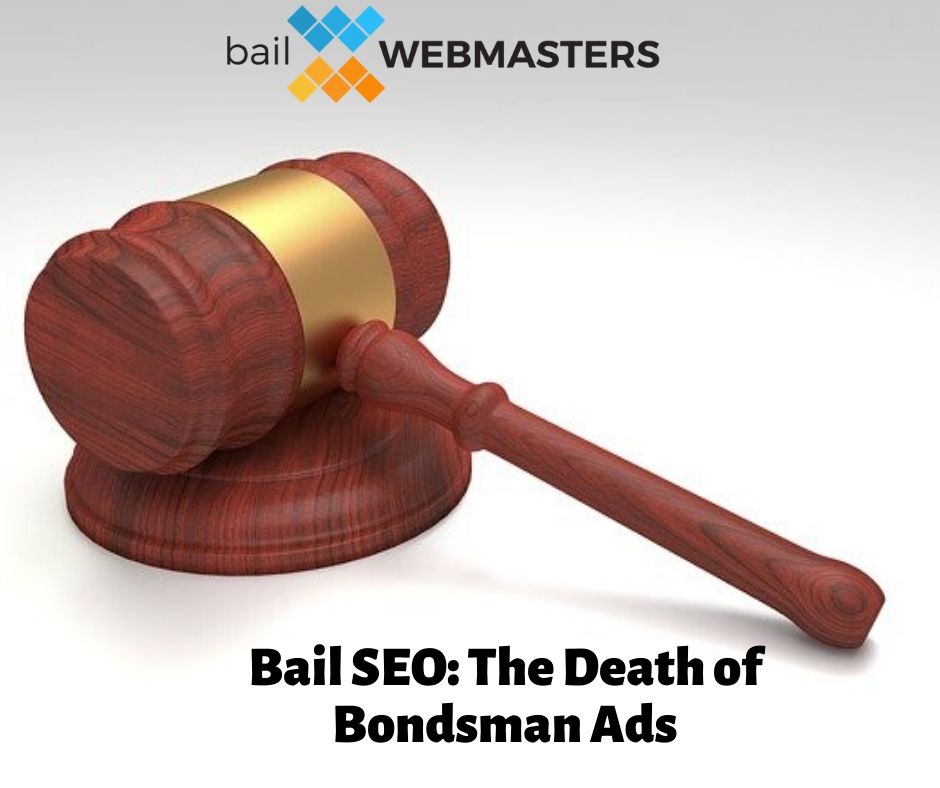 The Death of Bondsman Ads, and What it Means for Bail Companies

Google recently banned ads for bail services and the implications for the industry could be significant. Because PPC ads have long been considered the bread and butter of bondsman marketing, bail companies will now have to look elsewhere to promote their services with search engine optimization, otherwise known as “SEO” being on top of the list. Whether you agree or disagree with Google’s decision, there is nothing that can be done to change it. Bail Webmasters can help you make sense of what happened, why it happened, and what to do next.

What Does an Ad Ban Actually Mean?

Why Did Google Ban Bail Ads? 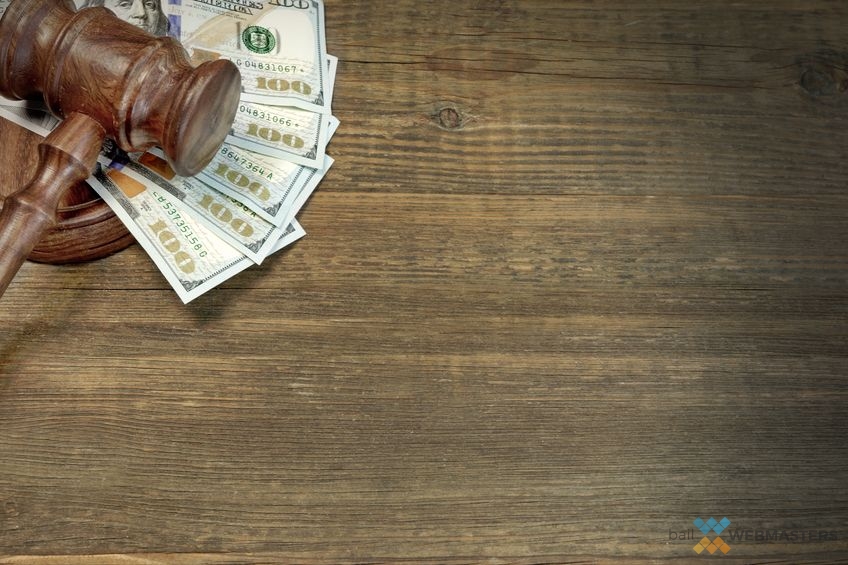 SEO Will Become The “New Normal” For Bail Bondsman

Google disallows any ads that are considered by their definition to market a deceptive or harmful product. Bondsman services often profit from low-income communities that are unable to post bail after having been arrested but prior to standing trial. This can put families in debt quickly and even if the defendant is found innocent, it will severely hinder their long-term financial well-being — further ravishing communities that are already struggling with income.

While the ethical reasons for banning bail ads have been made clear, the financial reasons have been strategically withheld from the public. As much as Google has attempted to brand their decision as strictly ethical, the reality is that money is a factor. Because low-income communities don’t represent a worthwhile ROI for Google Ads, banning said ads does not impact their bottom line. Their motive for instituting this ban probably falls somewhere in between the two ideas.

What Can Bondsman Do About It?

Since bondsmen are unlikely to shut down their businesses, they must find new ways to market their services online. Since PPC is no longer an option, organic search optimization becomes the next best method through which to generate internet leads. Because every company within your industry is subject to the same regulations, you have every chance of outranking them on search results with a competent bail SEO service. Areas of optimization to focus on include:

Content that exists on your website is referred to as on-page SEO. This includes everything from titles, headers, and meta descriptions, to body content, image alt text, and internal linking. The goal for every bondsman’s page is to inform their target consumer exactly how they can be helped. If someone has been arrested for a DUI, they’ll want to find a web page that talks specifically about DUI bail services and provides helpful information about how to proceed. Elements of on-page SEO include:

When people think of SEO conceptually, they are most frequently pondering on-page optimization. Keywords have always been a popular buzzword in the online marketing community, but they no longer hold as much weight as they once did. The highest-ranking pages today use a combination of keywords and relevant synonyms for a superior reading experience. The tactic of stuffing as many keywords as possible into your text is obsolete.

Optimizing your website is a great first step, but on-page SEO cannot alone make you rank towards the top of search results, in most cases. Remember, your web page only has to be incrementally better than your main competitors. So if your rivals are only doing on-page SEO, you can probably outrank them by doing it better. The reality, however, is that most websites have a full range of SEO methods, that extend beyond the page. Elements of off-site SEO are:

Like with their decision to discontinue bail ads, Google has also brought the hammer down on spammy link building. The difference is that this shift in focus happened back in 2013. Many sites were heavily penalized for the illegitimate formation of backlinks and suffered major ranking drops. It’s never been more important to keep your off-site SEO strategy within the regulations levied by Google and its constituents.

Some parts of optimization have nothing to do with words and everything to do with the operation. The quality of your content won’t matter if the website doesn’t load quickly enough or discourages simple navigation via a mobile device. Today, attention spans are shorter than ever before and people are unwilling to wait for information. If they can’t get an optimal mobile experience from your website, they’ll move on to your competitor. Aspects of technical SEO are:

Because users access the web on a wide range of devices, your bail website must display optimally on each one of them. Apple products like iPhones and iPads are extremely popular, but other devices like the Google Pixel and Samsung Galaxy must also be accounted for. And despite its steady decline, we can’t forget about the good old desktop computer. The same is true of laptops, MacBooks, and other kinds of hybrid devices. 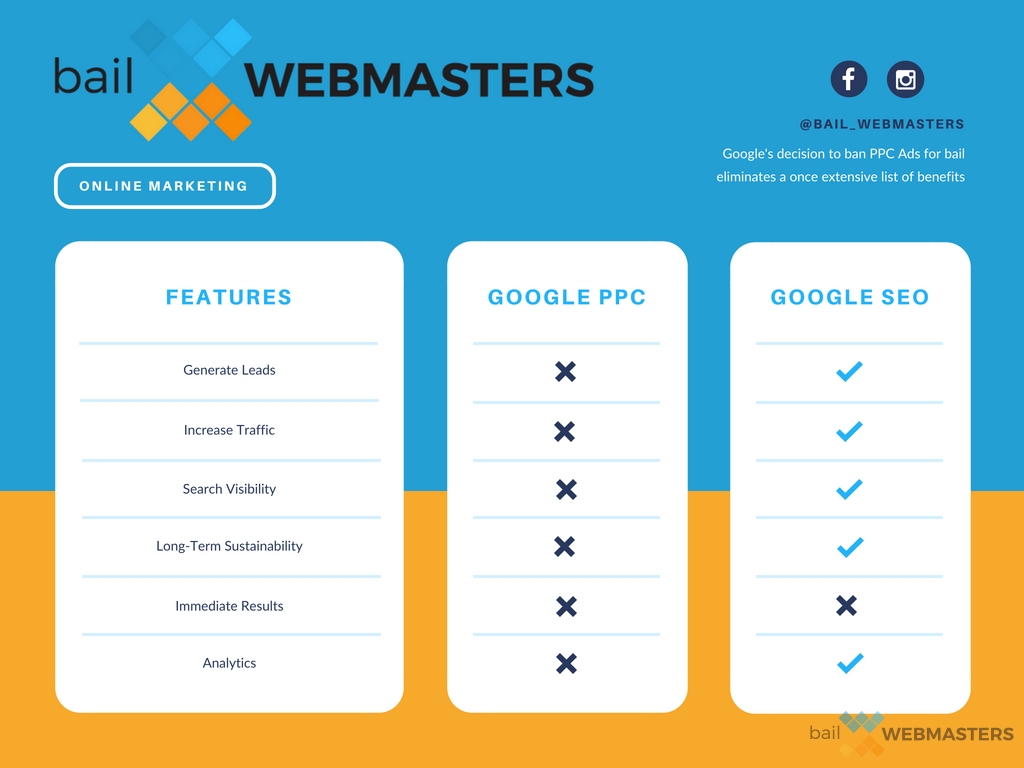 How Bail Webmasters Can Help

Since one of the pillars of your business has been pulled out from under you, investing in a marketing company to assist you with re-establishing your online presence is critical. Bail Webmasters can be that company for you. As specialists of bail marketing, our services are tailored specifically for bondsman which gives us a leg up on more general marketing firms. We understand how to rank your website for top keywords within your niche, and how to do so responsibly and sustainably. Our bondsman search engine optimization services consist of:

For many bail companies throughout the country, this is a stressful time. Because of Google’s decision to disallow PPC ads marketing your services, many are scrambling to find a way to supplement that traffic. The first step is to avoid panic. Don’t do anything radical just because one of your primary traffic streams has been cut off. With an understanding that you are under stress, Bail Webmasters can walk you through the process step by step, and help you either regain or sustain your traffic and lead generation. Call 866-362-3378 to speak with a bail bondsman SEO specialist today.

Aside from SEO and the now-prohibited PPC advertisements, bail bondsman have other avenues through which to pursue customer growth. There’s good old direct mail for bondsman looking to gain clients using a more traditional method. The problem with direct mail is that its ROI has grown increasingly limited over the years. The time spent crafting a graphically appealing postcard or flier is seldom worth its 1% or less response rate. Many of today’s consumers would respond more to inbound marketing which makes them feel in control of their own decisions, rather than outbound marketing, which feels like tired salesmanship.

If direct mail is too antiquated, email marketing seems like a possible supplement. The problem with email marketing is that you must have a sizeable contact library to utilize it effectively. For bondsman new to the trade, or to those who simply don’t have the customer base that merits a mass email newsletter, or something similar, SEO presents a far superior alternative to email marketing. Like with direct mail, email newsletters are fundamentally outbound marketing, and therefore generally work against the ideals of today’s consumers and their buying behaviors. Call 866-362-3378 for bail bondsman SEO services.